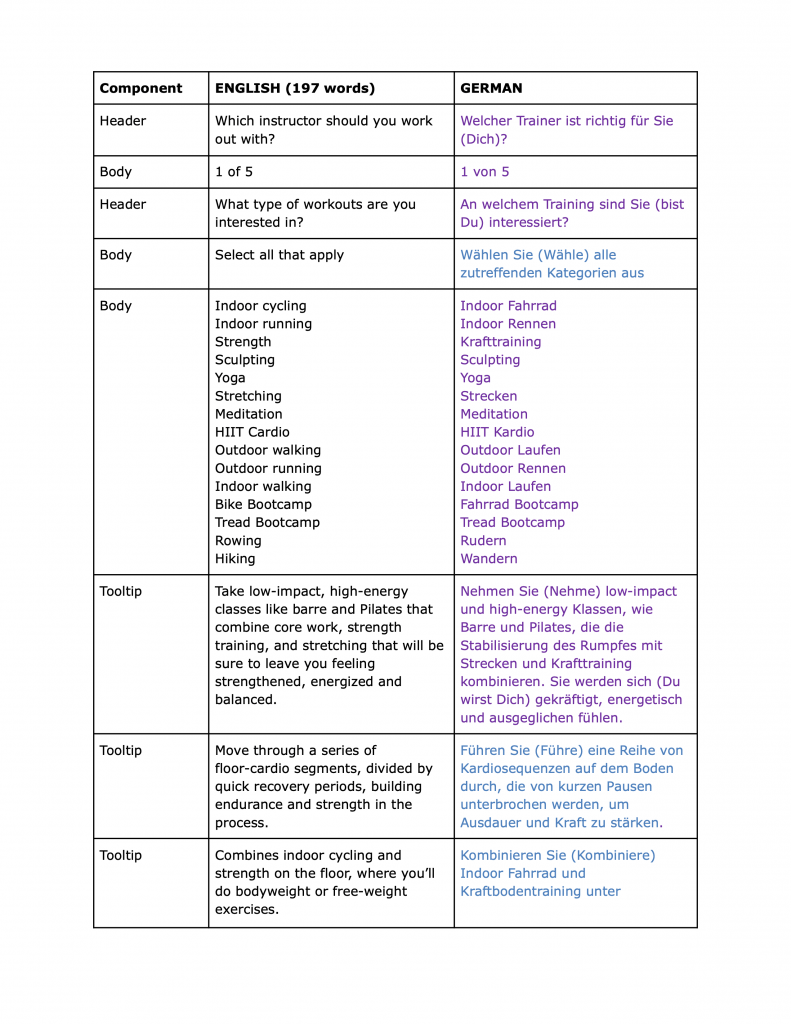 Here is an example of UX writing and localization that I did for a large American fitness company that introduced its new app and a German-language website to the German market.

Localization in UX writing is crucial when introducing a product to a foreign market. It is not enough to translate the copy as is into another language. The words, context and connotations have to be adapted to their intended customers and clients.

This process is sometimes referred to as Transcreation (“translation” and “creation”) or “creative translation” because the UX writer doesn’t translate the content word for word.

Transcreation is one of the most important tools a UX writer uses to localize content. The tone and voice of the original copy is preserved by shortening, lengthening or by rewriting it entirely.

Click on the image to read the detailed localization translation.

Before starting the localization project, I consulted with my client’s content- and development team about whether they can enlarge the body text boxes, forms, CTAs and other text elements on their website or app if needed to accommodate the wordier German version.

I analyzed the English version of the client’s website and the app to determine its content and user flow, as well as the client’s brand voice and tone.

The client did not want any changes done to the design of the German-language app, so I shortened the German translation to a minimum to accommodate the strict word count given while remaining true to its context. As a result, an exact translation was not always possible, altering the original English. I advised the client that the copy needs to be referred to the legal department for review.

Some translations could not be shortened; the word count ran over (marked in blue in the translation). I consulted with the English content team and advised them that in these instances, clarity should come first, and the design should follow.

Many German fitness and gym websites use the informal way of addressing their users. That said, mature customers might still want to be addressed formally. I asked for more guidance about the company’s preferred brand voice and advised the team that more user and market research is needed. For now, I provided the informal version of addressing customers in brackets.

My research revealed that most German gym/fitness websites leave equipment and training descriptions in the original English (i.e. sculpting, spinning, indoor/outdoor, HITT, boot camp). More market research is warranted. For now, I translated as much as I could into German but left some words untranslated whenever possible.

I marked the translations in red that differ substantially from the English original.