Gender neutral marketing not your thing? How do you like it when someone assumes who you are on the basis of what you do or where you work? For me, this is a deal breaker. When you approach me with a cold-call email to offer your services and assume I’m a man because I am a web developer, you will never get my business—even if you promise me sugar plums and cotton candy for life.

I receive many random email inquiries that offer services related to web development and design, from broken link checking services (please stop, I do that myself) to services that offer content farming (go away!) and target audience research (interesting!). None of them actually check out my business and who I am, and I don’t blame them for that. Who has the time? When you’re just starting out, your marketing strategy is to throw everything at the wall and see what sticks. I understand. I’m often tempted to do just that.

But that’s not an excuse not to make every effort to phrase your emails as gender neutral and as least sexist as possible. Just replace the “you guys” with “you”. How hard is that? Very, it seems.

Every other email I receive addresses me as a guy. I realize that “you guys” has become a colloquial way to address a crowd that comprises women and men. But it is insensitive. When you want to directly address someone and sell your services, don’t assume I am “your guy”.

The other day, I received an email from Shaw, who pitched his solo entrepreneur service to help business owners find their ideal target audience (nice idea, by the way, Shaw).

He sent out this blanket email ask:

“Hey Guys, I just came across “Content Design” through “Internet directories” and I really love what you guys have been [sic] going on. Congrats on having an awesome website! My name’s Shaw and I’m the founder of […]. We specialize in growing the number of new clients for agencies just like “Content Design” which is very similar to my other clients so I thought I’d reach out.

I PROMISE you we can double if not triple the number of new leads you guys generate every month. I’d like to find out more about what you’re currently doing to generate fresh leads and close new clients. If you’re ready to start getting more clients, I’d love to hop on a quick call with you. I’m also happy to answer any questions you may have. Thanks, have an awesome day!”

To which he replied (he obviously didn’t catch my sarcasm):

OK, Shaw, maybe now you know how it feels. And when you approach potential customers, that’s important. Will Shaw change his wording in the future? I don’t hold my breath, but maybe he’ll remember this little exchange when he types ‘you guys’ the next time. I assume that young Shaw has never experienced how it feels to be overlooked, dismissed or not really taken seriously as an entrepreneur because of gender. I have. And gender neutral marketing could have prevented that.

“What excludes us is the culture of tech. It’s young and it’s male; it’s very fast and a little reckless,” writes Angela DeLillio Galper, a tech professional with decades of experience under her belt. “For all their innovation, brash and headstrong young leaders sometimes dismiss ideas that run counter to the culture. And though most tech companies earnestly struggle to be inclusive, we never imagined how much that culture would one day sideline [women].” 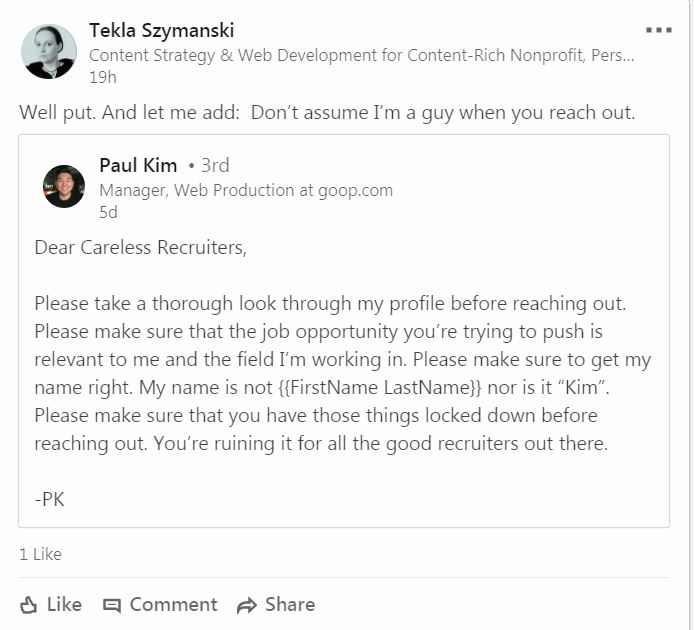 We’re all making the same mistake, including women. How many times have you, a woman, approached a group of women, or a group comprised of mostly women, with a cheerful “Hey Guys!” You may believe that the phrase has morphed into a gender-neutral informal greeting. It has not. ‘But Tekla,’ you mumble to yourself, ‘don’t be so super sensitive. Being in business is tough. Get over it.’ To which I reply: ‘Just because we all do it doesn’t make it right.’ And I believe this is not just a mundane linguistic matter but a matter of perception—a symptom of a cultural norm that holds back many women in tech.

“There are a lot of guys in tech and ‘guys’ is used all the time in my work and social environments by both men and women, but since it doesn’t resonate with me anymore, I do feel like I’m not part of the group,” Amy Chong, a 29-year-old user-experience researcher in San Francisco was quoted in The Atlantic. The article went on stating that “in some workplaces, people have used technology to gently push back against the gender-neutral ‘guys’ so that they themselves don’t have to speak up. A group of government employees wrote a custom response for the messaging app Slack that would have a bot ask questions like “Did you mean ‘friends’?” or “Did you mean ‘you all’?” whenever a user wrote ‘Hey guys’. A Spotify employee embraced the idea, and the professional network Ladies Get Paid has a similar feature in its Slack group of some 30,000 members.”

In many languages (here are examples of German and French gender-neutral quandaries), pronouns and nouns, singular and plural, all have gender-specific grammatical forms that make addressing a crowd in a gender-neutral way very challenging. Regardless, they try. The English language, on the other hand, is so much more accommodating. ‘You’ applies to a man, a woman, to a group of men, to a group of women or a mix of both. A doctor can be male or female and doctors can mean groups of men, women or both.

So, if your hip startup or new business doesn’t address ED but still assumes your target audience is male, think again. You’ve already lost half of your potential clients who have collectively tuned out. Way to go, guys and gals! But if you are sincere and are looking for a winning gender neutral marketing strategy, make an effort to ditch lazy and inconsiderate ways of addressing your clients in your future communications. All you have to do is replace ’you guys’ with ‘you’. It’s that simple. Replace it in all your communications—and also on your website copy. Let’s challenge this male-centric marketing approach as a default.

And then, Shaw, I may even consider your services.

Words to Avoid in Marketing for Nonprofits in 2019. It includes “Guys”  (Thank you, Big Duck)

The Problem With ‘Hey Guys’ (The Atlantic)

Why Y’all Should Be Our Salvation From the Sexist, Bro-y Tyranny of You Guys (Slate)

The Push to Make French Gender-Neutral (The Atlantic)

Guys, Can We Stop Calling Everybody ‘Guys’ Already? (Mic)

This article was also published on Ellevate Network’s Medium Page  and on its blog.

You have a story to tell and needed a website yesterday? Hi, I’m Tekla and this is your one-stop-shop for content-rich websites. Content + design,  site care, peace of mind.

What sets me apart? Many web developers don’t come from an editorial or content-creating background. I do. Together, we’ll amplify your message and adapt the right design to it.