European in New York: Just another American citizen—but without a middle name.

“[The United States is] a fantastically tolerant and flexible society that has absorbed the whole world, yet has difficulty comprehending the world beyond its borders.”

We stepped off the plane, bleary-eyed and half-asleep, at 5 am after a 14-hour flight from Israel. New York, JFK airport: A walk through endless gray tunnels, vast deserted halls; we were channeled into the “Immigration and Naturalization Office.” “Ma’am, would you please wait here,” I was graciously told. I had my immigration papers in order, the temporary Green Card in hand, and was now waiting to be formally allowed entry into the US. We fell into the cushioned seats, exhausted.

Suddenly, a faint rattling behind us. “Keep quiet over there,” somebody shouts, “as long as you are here, you belong to me!” The voice comes from a stout man in uniform—and he isn’t addressing me. His fleshy neck has light pink patches of anger that gradually turn purple. “You, shut up, I tell ya,” he barks. I hear more rattling and look back: behind me, far away from our row of cozy cushioned seats, on long wooden benches, a few dozen dark-skinned illegal immigrants are waiting for deportation. Their feet are chained to the benches.

This is my very first impression of America.

We are ushered into an adjacent office, where we are greeted with courtesy, and my fingerprints are taken. My papers are in order. “What is your middle name?” I am asked. “I don’t have a middle name.” I receive an astonished look. “Never mind that,” the officer says. “Welcome to the United States!” I hurry out, past the enormous Star-Spangled Banner, past the row of chained human beings, and am on my way.

I can still feel the sense of bewilderment I felt then. I was outraged by the way those people were treated. But I also felt that I was part of something. Immigrants made this country. I was merely one among many—and apparently, I was lucky.

A European in New York: “Your Middle Name, Ma’am?”

Everybody here has a middle name. ‘Middle name’ is a constant and standard component on all forms I had to fill out. I have yet to understand why, but it seems to be highly important to Americans.

If you don’t have a middle name, you should at least add “junior,” or “senior,” or be vain enough to attach “the Second,” or “the Third” to your name. I couldn’t fill out the field “Middle Name” on the immigration documents I had to submit. It was left open, naked on the sheet of paper; as though I am incomplete, my name missing a vital link. I stick out: I am from “the old country.” I am a European living in New York. I am an American from Europe.

The names Americans give their children reflect their own fast-paced world: Bob, Jim, Jack, and Jane. No Marie-Antoinette, or Magdalena, or Hans-Dieter. No. Ken, Tim, and Jeff—names that can be yelled out merrily on the football field. This is one of those no-nonsense approaches that define this society: Short and to the point. No time wasted and no complications. And since nobody feels the need to formally address one another—which would be far too time-consuming—everybody seems equal when spoken to. Dick can be a president—but a street cleaner as well.

This society is divided into rich and poor, strictly on an income/asset basis…and into races. You are free to do whatever you want: to become rich, to speak all that’s in your mind, to die in the gutter. Here, you can never rely on any social safety net. Socialism equals communism in the minds of many. The socialist worldview of the European is regarded here with suspicion, as backward and restrictive. Freedom above all, freedom from the state, and freedom to be miserable. But, it still doesn’t matter where you came from, what family roots you might have. You are not forced to stay poor, to belong your whole life to a class, a caste. You’re not called “Lord,” or “Ladyship,” but Bob, Jim, Jack, Jane. Here, the richest man in the world is simply referred to as Bill. And so was a president.

I know workplaces in Germany, where, after many years of working together, people keep addressing each other formally. It seems as if Europeans need more privacy. You are not at ease with strangers, don’t immediately throw a cheerful “Hey, how ya doing, what’s up?” in the air. You circle each other, check out the terrain. Privacy is holy in Europe. But this ‘buddy feeling’ in America doesn’t stop at addressing one another.

I believe a society can be measured through its bathroom habits. So, compare public restrooms in the United States with those in Europe: In America, all stalls have huge gaps between their mounted sides. Once inside, I can sometimes see myself in the opposite mirror through those gaps. And if I can—others can too. This would be inconceivable in Europe. I feel so very uncomfortable.

Nobody here seems to care.

So, Europeans and Americans are different. Americans laugh a lot, are less dour, more easygoing and funnier than the average European. In the beginning, I attributed it to the fact that no American was ever threatened by anything: Wars were fought far away, one didn’t have to take part if one didn’t want to, and the country was always too powerful to be in any real danger. But there seems to be more to it.

Though most Americans can trace their roots to the old country, and regardless of the relentless Americanization of Europe after the war, we do embrace different cultures. European culture is based on the past, on the glorious days, when Europe was the cradle of cultures and the arts, and it perceived the United States to be a mere wasteland, a dust bowl, its hinterland sparsely inhabited by people who spoke funny and wore feathers. Some still stick to this view: “Americans are fun to be with,” they think. “But they don’t have class.”

A Nation of Heroes…

But there is an American culture, and it serves the core idea behind the United States. This is a country made of a mosaic of cultures, blended together to form something new, an interaction of ideas and personae, not anchored in tediously upheld traditions and dusty presumptions, but in the here, now and tomorrow.

Sometimes, those ideas clash; sometimes, this society goes from one extreme to the next: from conservative to liberal, from filthy rich to poor. In the end, all Americans are deeply sentimental, fervent patriots. “The Greatest Nation on Earth,” Americans proudly proclaim, and they can get away with it. Only here, as the rest of the world is frequently reminded, can the idea of freedom be safeguarded. In a “nation of heroes,” anything goes.

The American worldview requires one to detach oneself from the shackles of the “old,” to plow ahead, to question everything. Many things get lost along the way—but many are gained: namely the almost innate reflex to improvise, to effortlessly swim against the current; characteristics, increasingly needed in the information age—which we Europeans lack.

…oblivious to the World

Many Americans lack something else, however, no less important: Modesty. They seem to see themselves as the center of it all, and don’t find it strange to call their annual baseball tournament the “World Series,” which is a series of baseball matches to determine the champion of Major League Baseball in the United States.

But more importantly, there is a tendency that whatever happens outside one’s own realm rarely sparks interest. Many Europeans are citizens of the world. Many Americans, so it seems, couldn’t care less about events and realities that don’t affect them directly. “The impressive integrative power of American society seems to generate a kind of obliviousness to the world, a multicultural unilateralism,” writes the German novelist and essayist Peter Schneider. “The result is a paradox: a fantastically tolerant and flexible society that has absorbed the whole world yet has difficulty comprehending the world beyond its borders.”

I wasn’t among those chained to benches and denied entry. I was ruled fit to stay.

Just another American citizen—but without a middle name. 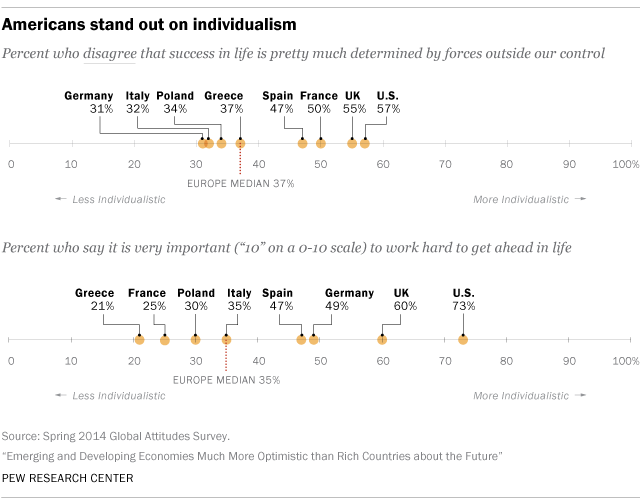 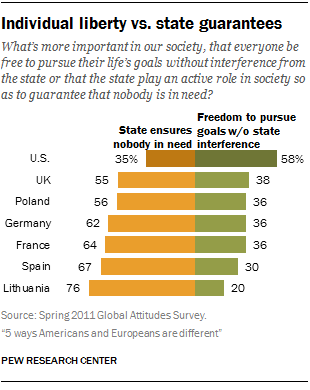 15 NYC Neighborhoods that Could Be European Cities (Huffington Post)

What Differentiates Europeans from Americans: The Cultural Gap Across the Atlantic 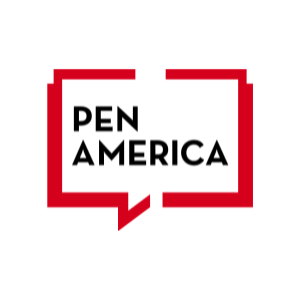